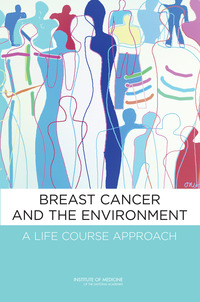 The Institute of Medicine report on breast cancer and the environment is a clear statement to breast cancer doctors, many of them gathered in San Antonio where the report was released, that a cascade of scientific evidence shows that environmental chemicals have biological activity that plausibly links them to breast cancer risk.  That’s a significant step, because for years, medical experts have dismissed questions about environmental chemicals and breast cancer and ridiculed concerns about consumer products - from deodorants to plastics - as “myths,” saying that there’s no evidence that exposures cause breast cancer.  The “no evidence” messages ignored studies by Silent Spring Institute and others that show hundreds of chemicals in consumer products and pollution cause breast tumors in animals, mimic estrogen (a known breast cancer risk factor), and stunt breast  development.  Now, the IOM recognizes that we must pay attention to this full range of research, including laboratory experimental studies, acknowledging that evidence from human studies is often not attainable.

We read the IOM report with particular interest, because Silent Spring Institute led a team that reviewed the scientific evidence on environmental factors and breast cancer in a 2007 supplement to the American Cancer Society’s peer-reviewed journal, Cancer.  That project, like the IOM report, was funded by Komen for the Cure.  The new report builds on our earlier Cancer papers and our more recent studies.  We hope that by highlighting the increasing evidence of plausible links, the IOM’s work will lead to a new national focus on environmental chemicals as an important focus for breast cancer prevention.

Breast cancer is still a killer, the leading cause of death for women in mid life, and an enormous source of suffering for the 230,000 US women diagnosed each year.  Nearly everyone knows someone close who has been through debilitating treatment, fueling an urgent cry for insights into prevention and evidence about what’s safe.  This report provides evidence for action and a crucial agenda for research to change the legacy of breast cancer for our daughters’ generation.  Because breast cancer is so common and the suspect chemicals so widespread, the nationwide benefit of finding and eliminating the risks would be large, even if the incremental risk to any one woman is small.